The 2015 edition of the Rolex Middle Sea Race, organised by the Royal Malta Yacht Club, will start this Saturday, 17th October, in Grand Harbour, Malta. For the second year in succession, well over 100 yachts will be competing, flying the flags of 22 countries.

The 36th edition of the race has a record number of 11 canting keel carbon fibre flyers racing, and weather permitting all of these high performance yachts are capable of breaking the course record, which has stood since George David's Rambler 90 record run of  2007 (47 hours 55 minutes and 3 seconds).
Leading the assault on the course record will be George David himself, racing the Juan K designed American Maxi, Rambler 88, with an all-star crew including; Brad Jackson, Andrew Cape, Joca Signorini, Rodney Ardern, Simon Daubney, Robbie Naismith, Lorenzo Mazza, Stu Wilson, Nathan Hislop, Jan Dekker, Jerry Kirby, Scott Beavis and Curtis Blewitt.
Two hi-tech multihulls will be racing in the MOCRA Class and both are very capable of beating Rambler 88 around the 606-mile course. Lloyd Thornburg's American MOD 70, Phaedo3, has been smashing world records since being launched last year. Phaedo3 is co-skippered by British sailor, Brian Thompson, who was part of the crew on Banque Populaire V, for the outright round the world record (Jules Verne Trophy).
Californian Peter Aschenbrenner will be racing his 63-foot Nigel Irens designed trimaran, Paradox. Whilst on paper, Phaedo3 is faster than Paradox, under the MOCRA rating rule, Paradox beat Phaedo3 in this year's Rolex Fastnet Race. Paradox crew includes the world speed record holder, Paul Larsen, who achieved over 65 knots in Sailrocket in 2012.
The overall winner of the Rolex Middle Sea Race and the coveted Rolex Middle Sea Race Trophy is decided by the best corrected time under the IRC handicap system. Last year, the competitors experienced flat calm to storm force winds. This variety makes predicting the overall winner very difficult.
In IRC One, Jan-Henrik Kisteit's German Maxi 72, Momo won class at the Rolex Fastnet Race and a top professional crew includes Volvo Ocean Race winner, Jules Salter as navigator for the race. Jens Kellinghusen's Ker 56, Varuna VI, will be competing in its debut race. Volvo Ocean winner, Robert Greenhalgh will be calling tactics.
In IRC Two, Michele Galli's Italian TP52, B2 will be racing, hoping to repeat their overall victory in 2013. Francesco de Angelis, one of Italy's most decorated sailors, will once again be tactician for the race. Vincenzo Onorato's Italian Cookson 50, Mascalzone Latino, was in a strong position last year, before gear failure put the team out of the race. Volvo Ocean Race winner, Ian Moore will be the navigator for Mascalzone Latino, alongside Flavio Favini as tactician.
In 2013, IRC 3 came to a dramatic conclusion with David Anastasi and Sonke Stein's J/133, Oiltanking Juno winning the class by under three minutes from Josef Schultheis and Timmy Camilleri's XP-ACT Bank Sails. Last year, XP-ACT was the class winner and second overall.
“There are three Xp-44s racing this year, as well as Juno and winning against those boats will be our first goal.” commented Josef Schultheis. “XP-ACT's crew includes the highly experienced Irish duo, Barry Hurley and Andrew Boyle, who won the Two Handed Class in the 2012 edition of the race and Jochem Visser, who has been part of winning crews for the Admiral's Cup, Rolex Sydney Hobart and Rolex Fastnet Race.
Last year's overall winner, Lee Satariano's Maltese J/122 Artie, will be aiming for a third win, which is unprecedented in the 47 year history of the race.
"It depends on the conditions." commented Lee. "It looks like it might be a light wind start, which will suit us, but the weather forecast is very changeable. We have much the same crew as last year and we are ready to race. Some weather models are showing light winds for the first two days, followed by a south easterly wind, which would really suit Artie. However, there are a number of extremely well sailed boats that will also benefit from the scenario.”
The international fleet of yachts will be crewed by an astounding mix of Olympic, America’s Cup and round the world sailors, as well as passionate amateur Corinthian sailors. Italian yachts represent the largest entry by country with 31 boats entered. Seven Maltese yachts will be competing, including Elusive II BOV. The 2015 edition of the Rolex Middle Sea Race will be the start of a new chapter for the race, and especially for the Podesta family, as Godwin Zammit Commodore of the Royal Malta Yacht Club explains.
• America 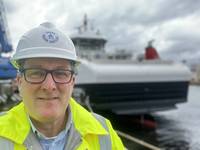