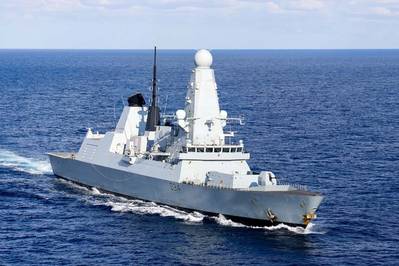 A U.K. Royal Navy warship assisted in the rescue of four people from a yacht that was taking on water and at risk of sinking in the English Channel near the Isle of Wight.

Last week, the Portsmouth-based Type 45 destroyer HMS Diamond answered a Mayday call from a civilian yacht that was taking on a significant amount of water while sailing from Beaulieu River in the New Forest toward Honfleur in France.

Diamond was in the area after leaving its home port and coordinated and conducted the rescue operation, working alongside Newhaven and Bembridge RNLI crews and a French Coastguard helicopter.

The warship sent one of its seaboats to the yacht and picked up four of the five personnel on board who were transferred back to Diamond to be examined by medical staff.

Those rescued were then taken to a nearby hospital via the Newhaven RNLI lifeboat.

Three of Diamond’s sailors then went back to the yacht and helped the boat’s skipper to stabilize the vessel and sail it back to the U.K.

Diamond’s Commanding Officer, Commander Peter Barfoot, praised his sailors and their quick actions in saving the yachtsmen and preventing the boat from sinking.

“When the yacht sent out her distress call, Diamond was in the vicinity and therefore able to respond in a timely manner,” he said.

“The ship’s company were able to evacuate and disembark the crew who needed medical assistance. At the same time some of the ship’s specialists were able to embark and provide essential support to the yacht’s skipper which ultimately prevented the vessel from sinking.

“In arduous conditions, working without respite, members of my ship’s company saved the lives of five sailors and ensured a vessel was not lost.

“This is in keeping with the finest traditions of the service and I could not be more proud of my team.” 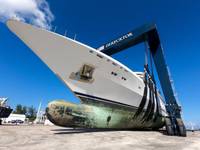