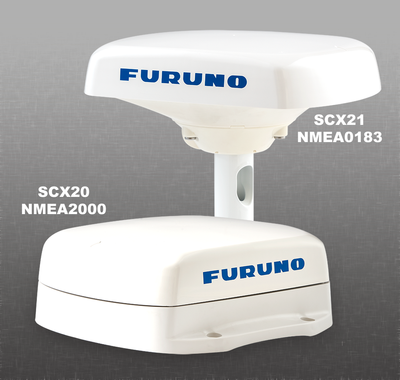 The SCX20 and SCX21 have added Baseline Target Architecture for multipath mitigation, accuracy. The four-antenna array of the SCX20 and SCX21 Satellite Compasses are configured in a manner that creates six unique baselines from which to calculate accurate heading information, even in severe environments.

Satellite Compasses traditionally utilize a two- or three-antenna configuration that allows for a single baseline of data, which can present performance challenges on some vessels due to multipath interference caused by signal blockage. The multipath effect occurs when a Satellite Compass receives a signal from paths other than direct line of sight, such as when the view of satellites is obscured, or when the signal is reflected off of a bulkhead, mast, or other obstruction. The multipath phenomenon can significantly reduce the performance of Satellite Compasses and has been an ongoing issue for marine electronics installers. The compact size, flexible mounting capabilities, and unique four-antenna design of the SCX20 and SCX21 aims to  make them capable of calculating precise heading, pitch, roll, and heave information, even when line of sight is limited to only a single satellite. Having multiple baselines makes them the perfect heading solution for even the most challenging of vessel installations.

The SCX20 connects to the ship's NMEA2000 backbone directly, while the SCX21 connects to onboard equipment via three fully configurable NMEA0183 ports. Furuno's GP39 is a perfect display and controller for the SCX21. Both models provide accurate Time, Position, 1.0˚ Heading accuracy, COG/SOG, Roll/Pitch/Heave, ROT (10 degrees/second), 3-Axis Speed, and air temperature and pressure data. Their compact and rugged housing weighs only 2.2lbs (1kg), and pole mount kits are available to provide a simple installation on any vessel.