Rik van Hemmen is the President of Martin & Ottaway...

Naval Architects can predict many things with great certainty. But the sea is an unpredictable task master and there are still a number of areas where it is difficult to get a technical handle on the problem.

High speed planing boat stability is one of those areas.

(Let me say it again: Aerospace engineering (I am one) is sandlot compared to Naval Architecture).

I have been called in on a dozen or so of those incidents and the full cause can only occasionally be determined. (And full disclosure; I also designed a planing hull that capsized during testing.)

Undoubtedly speed is a factor and often it may have something to do with the turning of the vessel, but that does not answer the central question as to whether it was a design problem, an operator problem or a maintenance problem.

I have dealt with boats flipping up to 45-feet in length and as slow as 20 knots and in my experience there have been the following realistic causes:

Technically I have seen a number of different instabilities that have resulted in capsizes. They are often related to the configuration of the vessel.
There is “tripping a chine”, which is a sudden inversion from a coordinated turn running on the inside chine to the outside chine. This may not always result in a full capsize, but can be so violent that the vessel occupants will be severely injured within the vessel or will be throw out of the vessel. I have seen tripping of chines on modern stepped hulls, modern deep V hulls, modern low V hulls and even modern RIBs

Then there is “hooking the forefoot”, which relates to boats that have a relatively deep forefoot, run relatively flat, and catch the forefoot in the water during a turn where this becomes a pivot point that will spin the boat out. Again, it may not result in a full capsize, but it is quite violent and will often result in serious injury and death. This phenomenon can occur on flats fishing boats and actually has been well studied on those boats, but can also occur on other modern planing hulls. Tripping and hooking can also occur in combination with each other, with equally devastating results.

The last category I call “the slow death roll”. This in many ways is the most troublesome and is simply a case where a vessel starts a turn and just keeps rolling to the inside of the turn until it capsizes. Strangely, the death roll does not necessarily occur at full speed or even unusually high speed. It may simply occur on a vessel that has been happily doing its thing for years and then one day decides to flip over with a normal load at modest speeds. I have seen this phenomenon on more slender, more classic planing boats, and especially on retro designs that use more powerful engines (and larger props) at lower speeds. On racing boats it can occur at higher speeds.

Getting back to my list of capsize causes, Option 5, a design that is inherently unsafe, mostly relates to its top speed. Up to 30 knots (and let’s say over 24 feet) one can reasonably expect to be able to purchase a vessel that stays on its feet even when erratically maneuvered. Meanwhile, it is no secret that anyone can purchase a powerboat that will run in excess of 80 knots and, at projectile speeds like that, one can expect things to go wrong when destabilizing forces raise their ugly head. In those capsizes I will generally point out that accidents are to be expected in the same way that accidents are to be expected when racing cars.

That does not mean that slower speed vessels cannot be inherently unsafe. Powerboat design is not controlled in the same way that car design is controlled. Any Tina, Dick or Harry can “design” a high-speed powerboat and sell it to the public. And on a bad design, 30 knots can as surely kill as 80 knots.

Causes 1 and 2 are a classic case of a designer or builder trying to achieve something by adding a clever fin, or hull steps, or changing the hull center of gravity, or adding horsepower to “enhance” the performance. One can do this, but such “novel” changes require thorough testing. Strangely, such thorough testing rarely occurs.

ABYC has made an effort at developing the H-26 performance testing method for planing hulls, but, so far, I have yet to encounter a capsized vessel where such testing occurred, and, quite frankly, I have yet to see the results of such tests on any one high-speed production planing boat.
The ABYC tests are a great start and often they can also reveal cause 3; force instability problems. Force instabilities occur when a propeller suddenly ventilates or a rudder becomes ineffective in certain conditions. These issues will always be unpredictable at the design stage, and can also occur in their own form in airplane designs, which is actually why airplanes require so much testing.

The ABYC tests are unlikely to identify all instability modes, since some instabilities could be the interplay of a number of subtle variations that do not occur during the ABYC test sequence (changing throttle settings during turns or unusual loading configurations), but if the boat becomes squirrelly at any one point in its performance envelope, the designer/builder can either modify the design, reduce the ability of the user to get into that part of the performance envelope, or provide a clear wheel stand warning not to enter that part of the performance envelope.

That warning is similar to the reduced speed warning provided on road signs in turns on country roads, or the Do-Not-Enter portion of a performance envelope of an airplane. Those of us who have operated outboard or outdrive powerboats may or may not know that in the engine manual there is generally a warning like this: 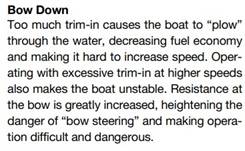 This behavior can be described as bow hooking at higher speeds.

Meanwhile in the industry at large, capsizes due to chine tripping are often described as having been caused by making a hard turn while the engines are trimmed out (bow up) and engines should be tucked in (bow down) when making a hard turn.
Yes, those are contradictory instructions, and certainly would not allow a user to figure out how to operate the vessel.

Regardless, I have never seen any of those warnings on the wheel stand of high speed powerboats. 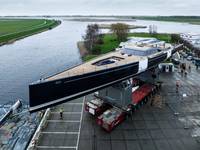 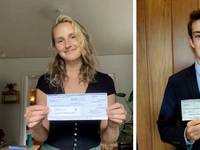