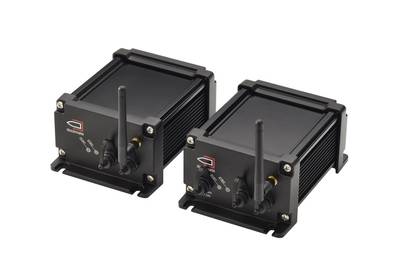 Dockmate, manufacturer of wireless remote controls for yachts, announced today its next generation of receivers that are built with advanced hardware and communication features.

The new Dockmate receiver includes a modernized look and rugged design that is fully compatible with all electronic engine and thruster controls. The receiver is made completely of aluminum, waterproof to IP67 rating and measures a mere 9-inches by 8-inches by 3-inches. Additionally, installation is made easier with four newly-incorporated outside mounting slots, the company said.

Each receiver integrates the proprietary communications protocol DockLink – an infinitely superior, state-of-the-art two-way FHSS (Frequency Hopping Spread Spectrum) communication with handshake and GFSK (FM) modulation on the 433 MHz frequency band in North America. FHSS means that every Dockmate uses a unique set of channels in the entire band of 72 channels, and changes from one frequency to another. The FHSS rolling code changes six times per second over six different channels, virtually eliminating any possible chance of interference. The Dockmate signal reaches up to 165-feet, which is by far the longest range in the industry and does not require an expensive range repeater on boats over 80-feet, like competitive products.

With two-way communication between the remote (transceiver) and the receiver, the Dockmate system ensures the operator is always aware of communication status. In the unlikely event that the signal is lost, the Dockmate remote control transmitter will sound three alarms: audible (buzzer), visual (flashing light) and tactile (vibration).

In addition to advances in the Dockmate receiver, the company has also announced the release of two new wireless interfaces for connections with Volvo Penta joysticks and their TJS Gateway. This eliminates the need to install a cable between the main helm and flybridge, which can be time-consuming and sometimes challenging. These new wireless interfaces use the exact same communication protocol as the receiver and remote controls.

Dockmate has also recently developed an Engine Universal Speed Control Interface which enables smooth, fully-proportional and variable-speed throttle control on a wide variety of analog engine controls. This type of engine throttle control allows the user to increase the engine RPMs to have a greater and safer amount of control of the boat in a marina when there is current or wind and idle speed is simply not enough to properly maneuver the vessel.

“We design our products to be the safest remote control systems on the market,” said Brian Sheehan, Dockmate U.S. spokesperson. “The Dockmate system is an effective slow-speed maneuvering system, and our receivers give customers the most affordable and reliable solution available.”