AIS Provide Skidmarks on the Ocean

Rik van Hemmen is the President of Martin & Ottaway... 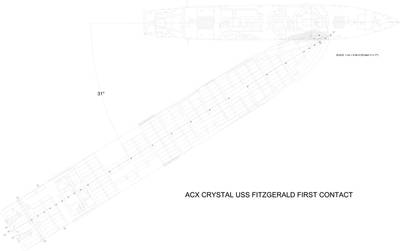 Many years ago, I received a call from an attorney who wanted me to get on the plane to Houston right away to take a look at damage on two ships that had collided in the approaches to Houston.

He told me that both vessels had become confused, had started to turn and managed to occupy the same bit of ocean at the same time.  His preliminary analysis indicated that, if he could prove the other vessel turned first, his vessel was in the clear.

This was in the late eighties or early nineties, the course recorders had not been running, there was no VDR, and no electronic navigation record. I told the attorney that there were no skid marks on the ocean and to figure out who turned first would be impossible. He was very persistent and said: “I don’t care I just want you to look at the damages and maybe you can think of something.” It turned out that I managed to prove that the other vessel turned first based on physical damage to the vessels only. Someday, I may discuss the technical aspects of this proof, but as this column will show, that it is about as useful as proving that certain types of buggywhips are better than others. This column is about our changing world where we went from a world without skidmarks on the ocean to a world filled with ocean skidmarks.

I don’t know who truly originated the AIS concept and I would love to find out. I have done some research, but that knowledge appears to be lost in time. Whoever thought of it deserves some special recognition because it is a very clever concept on almost too many levels to count. I am not looking for some ponderer who said: “Why don’t we put tracking equipment on ships?” That is nothing new or even interesting. I am looking for the person who said: “Hey, why don’t we have standard VHF radios interface with the ships GPS and transit a couple of data bits that other ships and shorebased stake holders can receive and use as they see fit?”

It is possible that the concept arose organically and there is no real inventor. As near as I can figure the concept gained currency after 9/11 and the USCG was a major driver to get it regulated through IMO. Regardless, I very strongly doubt that whoever thought of it actually realized how incredibly useful this little idea was.

AIS has tons of good unintended consequences and only a few bad unintended consequences, and the price at which it was achieved was tiny in the world of technological change. What was at first nothing but a short range position transmitter intended to help Vessel Traffic Systems, today, has become a swiss army knife of maritime information useful to just about everybody in the maritime adventure. I can go on to list the benefits, but readers of this magazine already know what AIS does for them today. However, I don’t even think we have seen the end of change due to AIS. Today we have port approaches that are paved with digital skid marks. While it is quite a bookkeeping puzzle to sort out all the rather faint and intermingled VHF AIS signals at longer range, not too long from now we will have worldwide coverage of AIS using satellite mounted receivers.  Interestingly we will achieve this while the airplane industry is still trying to figure out how not to lose airplanes once they fly over open oceans. Meanwhile the cost continues to be small. The original large ship investment was around $6,000 per ship, barely worth complaining about at IMO. Today AIS transceivers are less than $2,000 and even small craft owners no longer bother buying VHF transceivers without AIS transmit capability. While the satellite receivers are much more sophisticated, even the cost of those receivers is peanuts compared to what other systems like LORAN, GPS, SATCOM, RADAR and ECDIS have cost.

As a member of the SNAME annual meeting paper review committee (coming to Tacoma in late October) I just reviewed an interesting paper on predicting the risk of collision in busy sea lanes. This is a paper proposed by maritime researchers in Bangladesh who can simply dial in to the open source data available to everyone. By dialing into the data they made a first pass at trying to figure out when shipping lanes become too crowded and when the risk of collisions rises sharply.

So what are the negative consequences?

I have heard some people complain about a lack of independence in having to let everybody know what they are doing. I am not sure that is a negative consequence and, rather, it may be the loss of an unfair advantage. In this regard some sneaky ship operators may turn off the AIS midocean to dump some oil over the side. Interestingly Skytruth is doing some work on using satellite imaging to look for oil slicks on the ocean. So far, the ability to do this is limited, but it a big data problem, which means it is a computer problem that will eventually get sorted out. But if the ship had its AIS turned off how do you identify the ship? Again, it is a big data problem; it takes computer power, but it is solvable. Ships have to turn on their AIS near ports, and matching departures and arrivals with spill locations on the ocean can be done.

The Navy has now decided to use AIS during port approaches and departures, even for the Navy there are advantages to being seen when necessary.

For each column I write, Maritime Reporter & Engineering News has agreed to make a small donation to an organization of my choice. For this column I nominate Portside NY aboard the tanker Mary Whalen. Portside has started a new joint project with NY Public School 676. Hopefully the donation can help set up a permanent AIS display of New York harbor aboard the Mary Whalen for the kids to watch the harbor’s traffic. 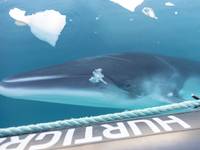 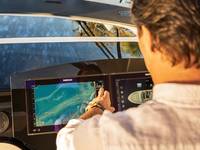 Brunswick to Acquire Navico for $1B 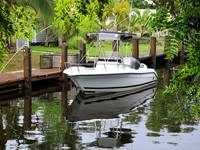 New US Law Requires Use of Engine Cut-off Switches